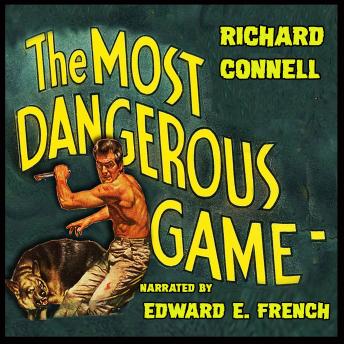 The Most Dangerous Game: or The Hounds of Zaroff

'The Most Dangerous Game', also published as 'The Hounds of Zaroff' is the classic horror yarn about big-game hunter Sanger Rainsford, from New York City, who falls off a yacht and swims to what seems to be an abandoned and isolated island in the Caribbean, where a sadistic Russian aristocrat hunts humans for sport. Rainsford must fight for his life. The thrill-packed story was inspired by the big-game hunting safaris in Africa and South America that were particularly fashionable among wealthy Americans in the 1920s. Author Richard Connell’s taut thriller was first published in Collier's on January 19, 1924 and is one of many works that entered the public domain in the United States in 2020. It has been called the 'most popular short story ever written in English.' Upon its publication, it won the O. Henry Award. Narrator Edward E. French ( an Oscar nominated and Emmy Award Winning Makeup FX Artist) brings the story to life in this tense performance reading.

Most Dangerous Game: or The Hounds of Zaroff