Mother Tongue: My Family's Globe-Trotting Quest to Dream in Mandarin, Laugh in Arabic, and Sing in Spanish 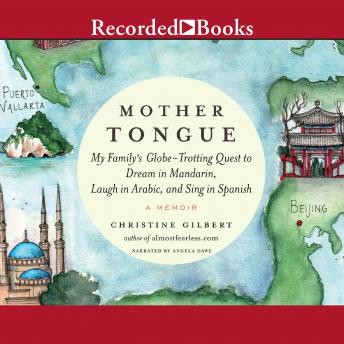 One woman's quest to learn Mandarin in Beijing, Arabic in Beirut, and Spanish in Mexico, with her young family along for the ride. Imagine negotiating for a replacement carburetor in rural Mexico with words you're secretly pulling from a pocket dictionary. Imagine your two-year-old asking for more niunai at dinner-a Mandarin word for milk that even you don't know yet. Imagine finding out that you're unexpectedly pregnant while living in war-torn Beirut. With vivid and evocative language, Christine Gilbert takes us along with her into foreign lands, showing us what it's like to make a life in an unfamiliar world-and in an unfamiliar tongue. Gilbert was a young mother when she boldly uprooted her family to move around the world, studying Mandarin in China, Arabic in Lebanon, and Spanish in Mexico, with her toddler son and all-American husband along for the ride. Their story takes us from Beijing to Beirut, from Cyprus to Chiang Mai-and also explores recent breakthroughs in bilingual brain mapping and the controversial debates happening in linguistics right now. Gilbert's adventures abroad prove just how much language influences culture (and vice versa), and lead her to results she never expected. Mother Tongue is a fascinating and uplifting story about taking big risks for bigger rewards and trying to find meaning and happiness through tireless pursuit-no matter what hurdles may arise. It's a treat for language enthusiasts and armchair travelers alike.

Mother Tongue: My Family's Globe-Trotting Quest to Dream in Mandarin, Laugh in Arabic, and Sing in Spanish