Movie Nights with the Reagans: A Memoir 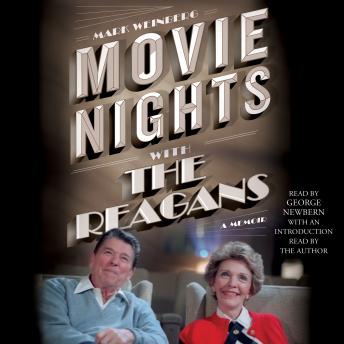 The former special advisor and press secretary to President Ronald Reagan shares a “sentimental but often revealing…enjoyable walk down Memory Lane” (Kirkus Reviews)—told through the movies he watched with the Reagans every week at Camp David.

Over the course of eight years, Mark Weinberg travelled to Camp David with Ronald and Nancy Reagan as they screened movies on Friday and Saturday nights. They watched movies in times of triumph, such as the aftermath of Reagan’s 1984 landslide, and after moments of tragedy, such as the explosion of the Challenger and the shooting of the President and Press Secretary Jim Brady.

Weinberg’s unparalleled access offers a rare glimpse of the Reagans—unscripted, relaxed, unburdened by the world, with no cameras in sight. Each chapter discusses a legendary film, what the Reagans thought of it, and provides warm anecdotes and untold stories about his family and the administration. From Reagan’s pranks on the Secret Service to his thoughts on the parallels between Hollywood and Washington, Weinberg paints a full picture of the president The New Yorker once famously dubbed “The Unknowable.”

A “meander through a simpler time capturing a different time and a different president” (USA TODAY), Movie Nights with the Reagans is a nostalgic journey through the 1980s and its most iconic films, seen through the eyes of one of Hollywood’s former stars: one who was simultaneously transforming the Republican Party, the American economy, and the course of the Cold War. “For those equally enthused about movies and the fortieth president, this book will serve as a welcome change from today’s political climate” (Publishers Weekly).

Movie Nights with the Reagans: A Memoir