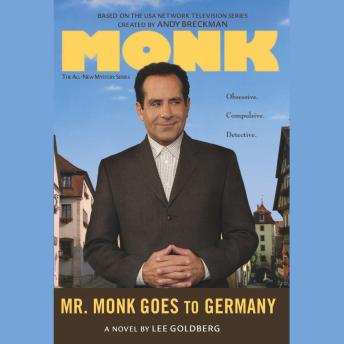 AdrianMonk is actually doing well lately. He is solving murders as fast as they come,and he has been noticeably less compulsive-he doesn't count his morning WheatChex until they're in the bowl. Progress is progress, and Monk knows he owes itall to his therapist, Dr. Kroger. So when Dr. Kroger attends a conference inGermany, Monk ends up in trouble. He can't tie his shoes, forgets how toswallow, and loses track of his blinking. Desperate to regain his footing, Monkfollows his shrink to Germany. And that's where Monk sees the man across acrowded town sqare-the man he's never stopped searching for. The man with sixfingers. The man responsible for his wife's death. Or did Monk just imaginecrossing paths with him?
Now,in a foreign land full of, well, foreigners, Monk must deal with his multitudeof phobias and contend with an especially unfriendly polizei department inorder to find the six-fingered man. He also must confront someone who thinksMonk may have just gone officially insane-his own psychiatrist.