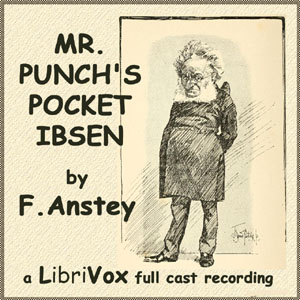 These short comic parodies of five well-known tragedies by Henrik Ibsen originally appeared in Punch, the British humor magazine. From the prefatory note: "The author is conscious that his imitation is painfully lacking in the mysterious obscurity of the original, that the vein of allegorical symbolism is thinner throughout than it should be, and that the characters are not nearly so mad as persons invariably are in real life—but these are the faults inevitable to a prentice hand, and he trusts that due allowances may be made for them by the critical." LibriVox has produced full-cast versions of all five plays that F. Anstey parodies in this collection: Rosmersholm, A Doll's House, Hedda Gabler, The Wild Duck, and The Master Builder. - Summary by Elizabeth Klett

This title is due for release on January 8, 2017
We'll send you an email as soon as it is available!