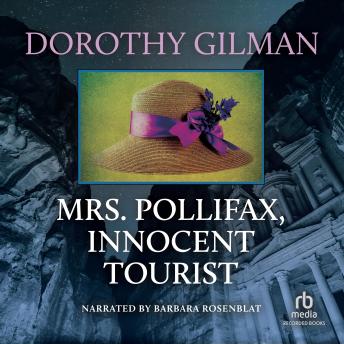 In Dorothy Gilman's best-selling mystery series, loveable grandmother Emily Pollifax has captured the hearts of millions with her secret CIA missions. Mrs. Pollifax, Innocent Tourist whisks the gray-haired agent into a perilous web of intrigue that spreads across the drifting sands of the volatile Middle East. An old CIA friend, Farrell, must collect an inflammatory manuscript smuggled out of Iraq into Jordan. Farrell has a simple request for Emily-provide cover during his trip to Jordan by posing as his fun-loving elderly cousin. But before the plane even lands, danger begins stalking the sprightly Mrs. Pollifax. Outwitting her wily opponents with her keen eye for the truth and her impeccable karate, Mrs. Pollifax is the lively senior citizen everyone dreams of someday becoming. You'll feel you know the aging spy and her colorful opponents personally with Barbara Rosenblat's outstanding narration.

This title is due for release on July 20, 2012
We'll send you an email as soon as it is available!