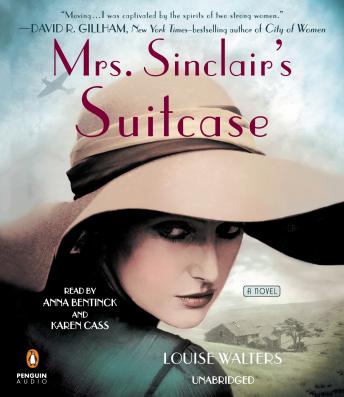 A heartbreaking and deeply compelling debut, Mrs. Sinclair’s Suitcase is a compulsive page-turner about thwarted love, dashed hopes, and family secrets—book-club fiction at its best.

Roberta, a lonely thirty-four-year-old bibliophile, works at The Old and New Bookshop in England. When she finds a letter inside her centenarian grandmother’s battered old suitcase that hints at a dark secret, her understanding of her family’s history is completely upturned. Running alongside Roberta’s narrative is that of her grandmother, Dorothy, as a forty-year-old childless woman desperate for motherhood during the early years of World War II. After a chance encounter with a Polish war pilot, Dorothy believes she’s finally found happiness, but must instead make an unthinkable decision whose consequences forever change the framework of her family.

The parallel stories of Roberta and Dorothy unravel over the course of eighty years as they both make their own ways through secrets, lies, sacrifices, and love. Utterly absorbing, Mrs. Sinclair’s Suitcase is a spellbinding tale of two worlds, one shattered by secrets and the other by the truth.