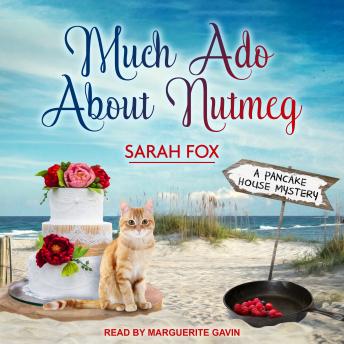 Much Ado About Nutmeg

Wedding bells are in the air-along with the aroma of maple syrup-in the latest Pancake House Mystery. But a series of murders threatens to spoil everyone's appetite . . .

Between tourist season, planning her beach wedding, and running her pancake house, the Flip Side, Marley McKinney is busier than ever. On top of that, one of her regulars is competing in Wildwood Cove's Golden Oldies Games-a sporting event for athletes fifty and over-and Marley wants to cheer her on. Everything's running as smooth as batter-until sports reporter Yvonne Pritchard stirs up a triple batch of trouble . . .

Yvonne has one admirer in town-Ed Herman-but she has many more enemies, from a disgruntled coach to an athlete she once shamed on social media. So when a body washes up on shore, and it's no accident, it's not a complete surprise Yvonne is the victim. And when Ed asks Marley to use her sleuthing skills to solve the crime, she'll have to squeeze in time between squeezing into wedding dresses. Then a second victim turns up, and Marley will have to work at high speed to stop a killer from piling up bodies faster than she can whip up a tall stack . . .

Much Ado About Nutmeg