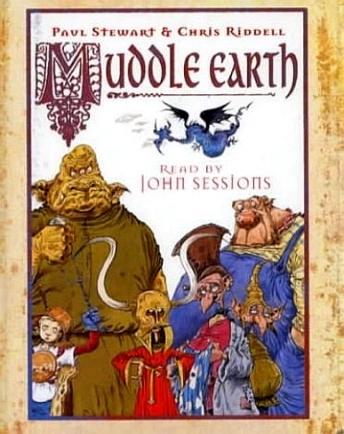 Muddle Earth is the first in the hilarious tongue-in-cheek fantasy series from bestselling duo Paul Stewart and Chris Riddell.
As the third moon rises over Muddle Earth's Perfumed Bog, the twinkling lights are lit on a small houseboat, home to a wizard, Randalf, and his familiar, a very sarcastic budgie called Veronica. Randalf is in trouble - he's stony broke. He's just spent his last silver pipsqueak. There's only one way for a wizard to make cash on Muddle Earth - and that's by doing some magic.
There's just one problem: Randalf has lost his spell book. He's just got a fragment of paper with half a spell on it - telling him how to summon a Great Warrior Hero. The last one, Quentin the Cake-Baker, wasn't a great success. But this time, it's going to be different.
And life is about to change beyond recognition for an ordinary schoolboy on ordinary earth - Joe Jefferson - and his dog, Henry. Welcome to a world of ogres and goblins, batbirds and pink stinky hogs, flying cupboards and terrifying teddy bears . . .

This title is due for release on April 6, 2007
We'll send you an email as soon as it is available!