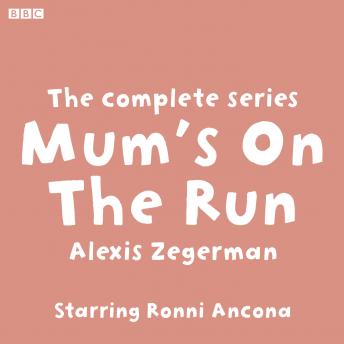 Mum's On The Run The complete series: Starring Ronni Ancona

A BBC Radio 4 full-cast comedy by Alexis Zegerman about the hectic life of a single mother, originally broadcast 25 August - 29 September 2010.

'Mum's on the Run' is a modern-day twist on the single-family situation. It follows the hectic life ('What life?') of single mum, Jen. Mother of two, Master of none - Jen seems to spend most of her time as an unpaid chauffeur to a 15-year-old teenage existentialist son, Toby, and a tonally challenged recorder-practising 11-year-old daughter, Felicity, whilst also coping with the jazz musician ex-husband, the fiercely competitive and annoying downstairs neighbour and a huge crush on her son's history teacher.

Episode 1 follows how Jen manages to drop the kids off at school at the beginning of the day but ends up collecting them from a nightclub at the end of it. Volunteering to do the Crocodile Walk into school to get brownie points with the other mothers is not Jen's idea of fun in torrential rain.

In episode 2 a quiet parent's evening becomes a farcical attempt by Jen and ex-husband Keith to recreate the execution of Charles I.

When Jen starts trying to date again in episode 3, things are bound to go awry. She manages to get involved in a complicated online mix up which involves the neighbours and the kids' teacher.

In episode 4 Jen has trouble with mice, cats and the local constabulary.

In episode 5 the desire to impress Mr Rigby and silence nagging children persuades Jen to attempt some charitable work. But a botched attempt to give blood and a disastrous baking error lead only to further humiliation.

Jen has at last secured a semi-date with Mr Rigby in episode 6 but then realises that it's bonfire night and she's promised the kids fireworks in the garden. Their date turns to farce as both Mr Rigby and the ex-husband turn up and neighbour Vivienne is almost hospitalised by a dodgy rocket.

Mum's On The Run The complete series: Starring Ronni Ancona