A Murder, a Mystery, and a Marriage 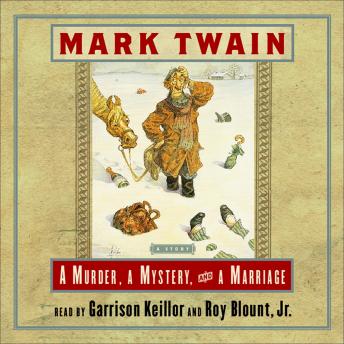 'Upon the border of a remote and out-of-the-way village in south-western Missouri lived an old farmer named John Gray...'In 1876, the same year The Adventures of Tom Sawyer was published, Mark Twain wrote a story for The Atlantic Monthly. He meant it as a 'blind novelette'--a challenge to other writers to submit their own ending of the story in a national competition. Twain asked his editor at The Atlantic to request submissions from leading authors of the day, including Henry James.Perhaps because few writers could write as well as Twain, no one responded, and Twain's original complete manuscript languished in literary hibernation. It was rediscovered in 1995 and will appear in The Atlantic Monthly in summer 2001, having come full circle. Set in the fictional town of Deer Lick, Missouri, A Murder, a Mystery, and a Marriage chronicles the fortunes of a farmer determined to have his daughter marry the son of a wealthy man. It's a charming story in the Twain tradition and a delightful addition to his legacy.

Murder, a Mystery, and a Marriage

This title is due for release on July 17, 2001
We'll send you an email as soon as it is available!