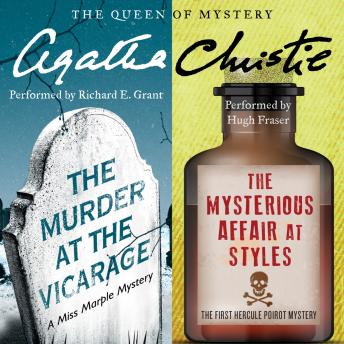 The Murder at the Vicarage & The Mysterious Affair at Styles

THE MURDER AT THE VICARAGE

The Murder at the Vicarage is Agatha Christie’s first mystery to feature the beloved investigator Miss Marple—as a dead body in a clergyman’s study proves to the indomitable sleuth that no place, holy or otherwise, is a sanctuary from homicide.

Miss Marple encounters a compelling murder mystery in the sleepy little village of St. Mary Mead, where under the seemingly peaceful exterior of an English country village lurks intrigue, guilt, deception and death.

Colonel Protheroe, local magistrate and overbearing land-owner is the most detested man in the village. Everyone--even in the vicar--wishes he were dead. And very soon he is--shot in the head in the vicar's own study. Faced with a surfeit of suspects, only the inscrutable Miss Marple can unravel the tangled web of clues that will lead to the unmasking of the killer.

THE MYSTERIOUS AFFAIR AT STYLES

Hercule Poirot solves his first case in the Agatha Christie novel that started it all, now in a fully restored edition that features a “missing chapter” along with commentary from Christie expert John Curran.

Who poisoned the wealthy Emily Inglethorp and how did the murderer penetrate and escape from her locked bedroom? Suspects abound in the quaint village of Styles St. Mary—from the heiress's fawning new husband to her two stepsons, her volatile housekeeper, and a pretty nurse who works in a hospital dispensary.

With impeccable timing, and making his unforgettable debut, the brilliant Belgian detective Hercule Poirot is on the case.

Murder at the Vicarage & The Mysterious Affair at Styles

This title is due for release on October 16, 2012
We'll send you an email as soon as it is available!