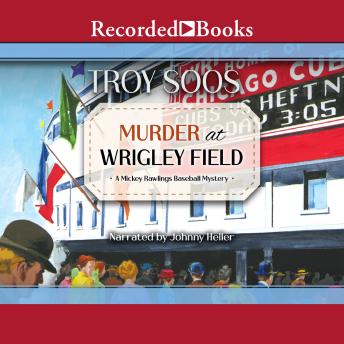 The year is 1918, the place, the North Side of Chicago. Starting for the first-place Cubs and hitting a career high of .274, for the first time in his life, Mickey Rawlings is feeling comfortable enough to buy furniture. But it is a time of mixed blessings; ominous battles are brewing at home and abroad. On the homefront, Major League baseball may be suspended for the duration of the war, anti-German sentiment is running high, and Mickey's best friend-a rookie named Willie Kaiser-has just been shot right on the diamond. Mickey doesn't buy the official explanation of 'accidental death from a stray bullet.' To him it is beginning to smell like murder. Mickey's search for answers takes him from silent movies to speakeasies to the stockyards. Troy Soos is celebrated for his skill in recreating an old-time baseball atmosphere and unforgettable real-life characters, and Johnny Heller, as Mickey, captures all the colorful detail.

This title is due for release on December 5, 2008
We'll send you an email as soon as it is available!