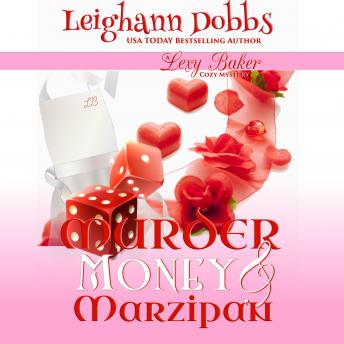 When Lexy Baker makes it to the finale of America's most prestigious bakery contest, Bakery Battles, she thinks her biggest dream has finally come true...
Until she stumbles across the dead body of judge Amanda Scott-Saunders.
What starts out as a bad day for Lexy becomes even worse when the police discover the judge was strangled with Lexy's apron. Now Lexy's sitting at the top of the suspect list with a motive, means and opportunity... but no solid alibi.
Lexy soon finds herself in a race against time to find the real killer before she ends up disqualified from the contest, or worse, in jail. But that's no easy task. There's a bakery competition full of suspects who all hated the victim and have a $100,000 motive for murder. And then there's the gorgeous, smart police detective who has mysterious ties to Lexy's boyfriend and thinks Lexy is the killer.
Luckily Lexy has a secret weapon -- her iPad-toting grandmother. As long as Lexy can lure Nans away from the slot machines, she and her gang of senior citizen amateur detectives can help Lexy sift through the clues to uncover the startling truth about the real killer.
With a $100,000 grand prize at stake and the search for the killer heating up -- will Lexy clear her name in time to grab the prize... or will her dream turn into a nightmare?