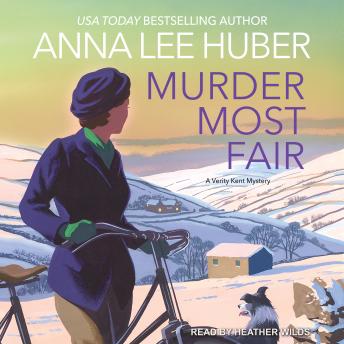 All is far from quiet on the home front in nationally bestselling author Anna Lee Huber's captivating mystery series, in which former Secret Service agent Verity Kent receives a visitor-who is being trailed by a killer . . .

November 1919. A relaxing few weeks by the seaside with her husband, Sidney, could almost convince Verity Kent that life has returned to the pleasant rhythm of pre-war days. Then Verity's beloved Great-Aunt Ilse lands on their doorstep. After years in war-ravaged Germany, Ilse has returned to England to repair her fragile health-and to escape trouble. Someone has been sending her anonymous threats, and Verity's Secret Service contacts can only provide unsettling answers.

Even deep in the Yorkshire Dales, where she joins Verity's family for the holidays, Ilse encounters difficulties. Normally peaceful neighbors are hostile, seeking someone to blame for the losses they've endured. When Ilse's maid is found dead, Verity must uncover whether this is anti-German sentiment taken to murderous lengths, or whether there is a more personal motive at work. Could Verity's shadowy nemesis, Lord Ardmore, be involved? And if so, how much closer to home will the blow land when he inevitably strikes again?