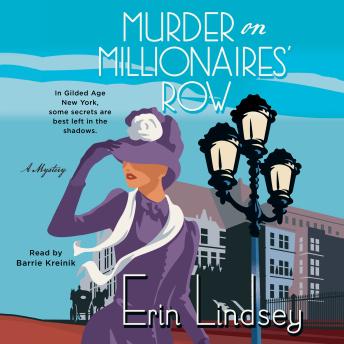 Murder on Millionaires' Row: A Mystery

Rose Gallagher might dream of bigger things, but she's content enough with her life as a housemaid. After all, it's not every girl from Five Points who gets to spend her days in a posh Fifth Avenue brownstone, even if only to sweep its floors. But all that changes on the day her boss, Mr. Thomas Wiltshire, disappears. Rose is certain Mr. Wiltshire is in trouble, but the police treat his disappearance as nothing more than the whims of a rich young man behaving badly. Meanwhile, the friend who reported him missing is suspiciously unhelpful. With nowhere left to turn, Rose takes it upon herself to find her handsome young employer.
The investigation takes her from the marble palaces of Fifth Avenue to the sordid streets of Five Points. When a ghostly apparition accosts her on the street, Rose begins to realize that the world around her isn't at all as it seems-and her place in it is about to change forever.
Praise for Murder on Millionaires' Row:
"Sharp, insightful, and more than a little sassy, Rose Gallagher is a heroine to cheer for. Lovers of historical mysteries and all things supernatural will devour Murder on Millionaires' Row and clamor for more." -Tasha Alexander, New York Times bestselling author of Death in St. Petersburg

Murder on Millionaires' Row: A Mystery