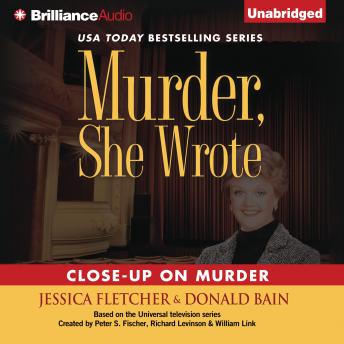 Murder, She Wrote: Close-Up on Murder

Jessica Fletcher learns that the movie biz can make you, break you, or kill you....

Cabot Cove is about to be invaded—by Hollywood. One of Jessica’s older novels is being made into a big-budget movie. The producer has decided to shoot most of the film on location in town, since the book was loosely based on a murder that shocked Cabot Cove over a decade earlier.

The murder occurred when a judge was gunned down while walking her dog. The prime suspect: an enraged husband whom the judge ruled against in a child custody case. But further investigation pointed to the victim’s own husband—and ultimately to his mistress, accused of eliminating her rival.

Unfortunately, everyone on the set has a hidden agenda. A novice director wants his shot at the big-time. A fading star, making a comeback, has many unreasonable demands. Her astrologer sees trouble in the stars. And a stranger on the movie lot is stalking Jessica.

But fiction and reality fatally collide when the actress playing the judge is shot—the only witness her dog—and there’s a cast and crew of possible suspects. With tensions between locals and the Hollywood horde mounting, Jessica must find the killer before anyone else is left on the cutting-room floor.