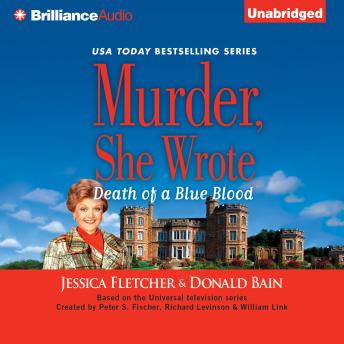 Murder, She Wrote: Death of a Blue Blood

Jessica Fletcher is invited to ring in the New Year with British aristocracy. Too bad someone’s about to end the life of the party....Jessica Fletcher and her friend Scotland Yard detective inspector George Sutherland are invited to attend a New Year’s Eve Ball at Castorbrook Castle, thanks to her British publisher. Shortly after arriving in the idyllic English countryside, Jessica discovers the body of a lady’s maid in the garden.

While their host, Lord Norrance, his snobbish third wife, other members of the household, and party guests squabble over the tragic death in tight-lipped, perfectly mannered, thoroughly British style, family relations are strained as old wounds are reopened and cutting remarks are freely handed out. And that’s only during teatime!

As midnight beckons at the ball the next night, the earl offers a toast, complete with fireworks. But the merriment crashes to a halt when he falls ill and dies, apparently poisoned—and the number of suspects with a grudge against the lord of the manor sprouts like English ivy.

Now it’s up to Jessica and George to find the killer—or killers—before another corpse welcomes in the New Year....