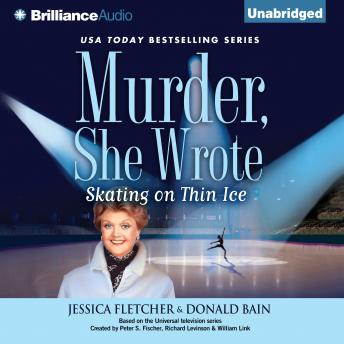 Christine Allen, with dreams of competing in top-level pairs figure skating competitions, has traveled to Cabot Cove to train at the town's newly refurbished ice arena. Under the tutelage of former gold medalist Brian Devlin and partnered with up-and-coming Russian skater Alexei Olshansky, she finds herself caught in the cross fire between a hot-tempered perfectionist and a pretentious chauvinist.

The trio's efforts to function as a team are further thwarted by a series of "accidents" that keep Cabot Cove's Dr. Seth Hazlitt and the hospital's emergency room hopping. Is someone sabotaging the skaters? It's a suspicion that gains credibility when one of the trio is found dead at the arena. An accident? Jessica doesn't think so.

Donning her old figure skates, she takes to the ice for her own investigation, learning just how many enemies the victim gained while living in Cabot Cove, and identifying the people who would benefit from this untimely death. The list grows-and the closer Jessica gets to the truth, the closer she comes to being left out in the cold by a merciless killer.