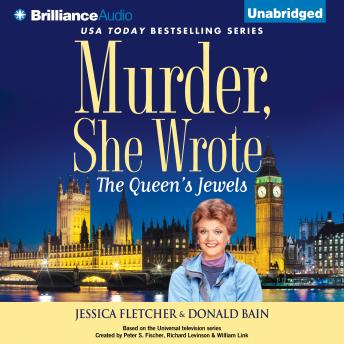 Murder, She Wrote: The Queen's Jewels

Ever since the majestic vessel's maiden voyage, Jessica Fletcher has wanted to take a transatlantic journey on the legendary Queen Mary 2. Now she's finally getting her chance. She's hoping to fly to London, spend a few days visiting, and then depart on the QM2 from the port of Southampton.

When she calls Scotland Yard inspector George Sutherland to let him know she's on her way, her old friend mentions his latest puzzler of a case: an enormously valuable diamond was stolen from its wealthy owner, who was murdered during the heist.

Jessica is well aware of the story, having read about it in every stateside newspaper. But when she finally boards her dream boat, the deadly mystery appears to have followed her up the gangplank onto the ship. Now, in the middle of the Atlantic Ocean, she must try to enjoy the sumptuous seaborne surroundings while she searches for a priceless diamond-and the person desperate enough to take a life for it.

Murder, She Wrote: The Queen's Jewels