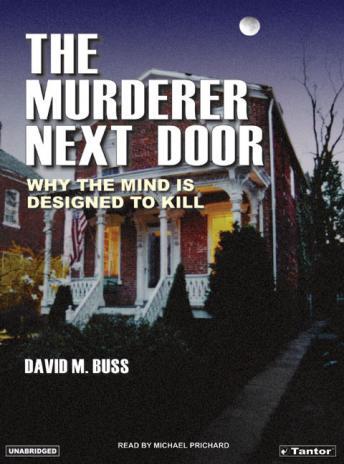 The Murderer Next Door: Why the Mind Is Designed to Kill

As acclaimed psychological researcher and author David Buss writes, 'People are mesmerized by murder. It commands our attention like no other human phenomenon, and those touched by its ugly tendrils never forget.' Though we may like to believe that murderers are pathological misfits and hardened criminals, the vast majority of murders are committed by people who, until the day they kill, would seem to be perfectly normal.

David Buss's pioneering work has made major national news in the past, and this provocative book is sure to generate a storm of attention. The Murderer Next Door is a riveting look into the dark underworld of the human psyche- an astonishing exploration of when and why we kill and what might push any one of us over the edge. A leader in the innovative field of evolutionary psychology, Buss conducted an unprecedented set of studies investigating the underlying motives and circumstances of murders, from the bizarre outlier cases of serial killers to those of the friendly next-door neighbor who one day kills his wife.

Reporting on findings that are often startling and counterintuitive-the younger woman involved in a love triangle is at a high risk of being killed-he puts forth a bold new general theory of homicide, arguing that the human psyche has evolved specialized adaptations whose function is to kill. Taking readers through the surprising twists and turns of the evolutionary logic of murder, he explains exactly when each of us is most at risk, both of being murdered and of becoming a murderer. His findings about the high-risk situations alone will be news making.

Featuring gripping storytelling about specific murder cases-including a never used FBI file of more than 400,000 murders and a highly detailed study of 400 murders conducted by Buss in collaboration with a forensic psychiatrist, and a pioneering investigation of homicidal fantasies in which Buss found that 91 percent of men and 84 percent of women have had at least one such vivid fantasy-The Murderer Next Door will be necessary reading for those who have been fascinated by books on profiling, lovers of true crime and murder mysteries, as well as readers intrigued by the inner workings of the human mind.

Based on a wealth of groundbreaking research, a leading psychologist's fascinating investigation of why we are all 'wired to kill'

Murderer Next Door: Why the Mind Is Designed to Kill