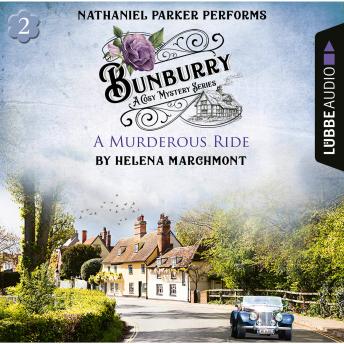 Miss Marple meets Oscar Wilde in this new series of cosy mysteries set in the picturesque Cotswolds village of Bunburry. In 'A Murderous Ride,' the second Bunburry book, Alfie discovers that he has not only inherited a cottage from his late Aunt Augusta but also a 1950s Jaguar. He is dismayed: for reasons of his own, he no longer drives. Aunt Augusta's best friends, Liz and Marge, persuade him to get behind the wheel again - but that's just the start of his troubles. Alfie discovers it's a seriously bad idea to get on the wrong side of the local police sergeant. Especially when he finds himself at a murder scene and the sergeant decides Alfie's the murderer. There's only one thing to be done. Alfie has to track down the real murderer himself - which will force him to drive as he's never driven before. Nathaniel Parker, born in 1962, graduated from the London Academy of Music and Dramatic Art and went on to join the Royal Shakespeare Company. His television career began in 1988 when he played Flying Officer 'Flash' Gordon in the LWT mini-series Piece of Cake. He is also the lead in the BBC series Inspector Lynley Mysteries, based on the novels by Elizabeth George. Nathaniel Parker has an extensive list of audio books to his credit, ranging from the classics of Charles Dickens and Thomas Hardy to more modern writings and children's books.