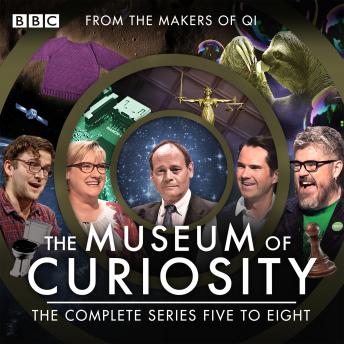 The Museum of Curiosity: Series 5-8: The BBC Radio 4 comedy series

Join Professor John Lloyd and Curators Jimmy Carr, Humphrey Ker, Phill Jupitus and Sarah Millican as they plunge down the badger hole of ignorance in a search for the universe's most mind-boggling oddnesses.

The Museum of Curiosity is BBC Radio 4's monumental comedy edifice, and the only one with gargoyles in the foyer. It allows nothing inside that doesn’t make you scratch your head, stroke your chin or, at the very least, go ‘Hmm’. Fortunately, helping to fill its almost vacant plinths is a gathering of the world’s most original minds.

In addition to all the episodes from Series 5-8, the 2015 'Coding Special' is also included. Duration: 12 hours approx