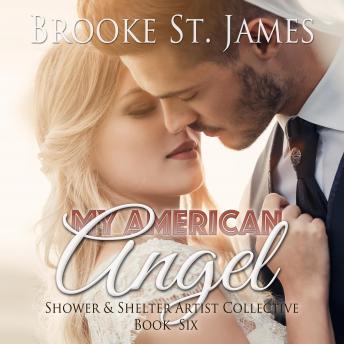 My American Angel is the sixth and final installment of the Shower & Shelter Artist Collective series. It can also be read as a standalone.

Theo Duval was born and raised in Montréal. He was only ten-years-old when he met a young American girl named Caroline at a public library near his home. Though there were some serious language barriers, the two of them quickly felt the first sparks of young love. Caroline's visit to Montréal was brief, and Theo was soon left with only the vivid memories of his first crush. They had haunted him for years, and he always felt like she was the one who got away.

Caroline had a slightly different take on their encounter. In her mind, she clearly told Theo that if neither of them were married by the time they turned thirty, they'd reunite and ride off into the sunset. It never occurred to her that Theo might have agreed to her plan without understanding a single word of what she said.

If you guessed that these two ultimately found each other again and got their happily ever after, then you'd be right. But the real fun is in finding out how, after twenty years of separation, it all came to pass.