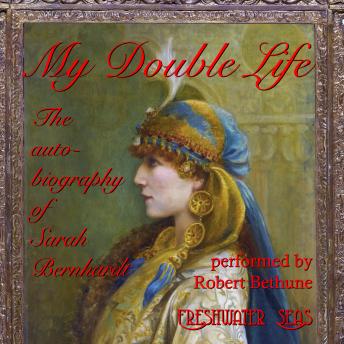 My Double Life: the autobiography of Sarah Bernhardt

Sarah Bernhardt embodied--and indeed, in many ways, invented--the persona of the superstar actress. During her life and after her death, she was constantly the center of a swirl of drama, attention, controversy and emotional display, both on and off the stage--and she did everything she could to keep the swirl swirling, fanning the winds and the breezes in all possible ways.

The one thing that cannot be denied about her is her extraordinary ability as an actress. Even George Bernard Shaw, who despised the florid, romantic, highly emotional style of Bernhardt and her contemporaries, admitted her power to hold the audience. For him, despite his antipathy toward her style, she still had the power of "making you admire her, pity her, champion her, weep with her, laugh at her jokes, follow her fortunes breathlessly and applaud her wildly when the curtain falls...."

In 1907, at the age of 63, with many, many highly successful performances--both on and off the stage--behind her, she wrote this autobiography. In it, she shares her stories, her feelings, and even her fantasies, which do sometimes replace her memories, vividly and with great personal presence. She wrote in French and this English text was published at the same time. She intended to write a second volume, but never did so. The English text is by an anonymous translator|it was probably done in a hurry and has its faults, but it is the translation published in Bernhardt's lifetime.

It is a book that takes us back to a time when live theatre was the dominant mass medium of the entire world|when a woman performing French plays in French commanded English- and Spanish-speaking audiences around the globe|when there was a unanimity of spirit and taste between playwrights, actors and audiences utterly lacking in our modern world.

This title is due for release on December 28, 2017
We'll send you an email as soon as it is available!