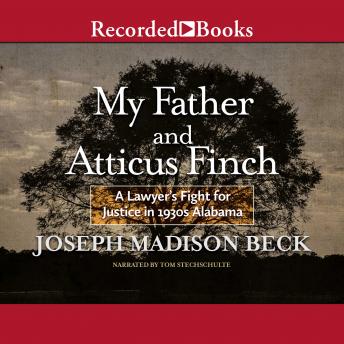 My Father and Atticus Finch: A Lawyer's Fight for Justice in 1930's Alabama

The story of Foster Beck, the author's late father, whose defense of a black man accused of rape in 1930s Alabama foreshadowed the trial at the heart of To Kill a Mockingbird. As a child, Joseph Beck heard the stories-when other lawyers came up with excuses, his father courageously defended a black man charged with raping a white woman. Now a lawyer himself, Beck reconstructs his father's role in State of Alabama vs. Charles White, Alias, a trial that was much publicized when Harper Lee was twelve years old. On the day of Foster Beck's client's arrest, the leading local newspaper reported, under a page-one headline, that 'a wandering negro fortune teller giving the name Charles White' had 'volunteered a detailed confession of the attack' of a local white girl. However, Foster Beck concluded that the confession was coerced. The same article claimed that 'the negro accomplished his dastardly purpose,' but as in To Kill a Mockingbird, there was evidence at the trial to the contrary. Throughout the proceedings, the defendant had to be escorted from the courthouse to a distant prison 'for safekeeping,' and the courthouse itself was surrounded by a detachment of sixteen Alabama highway patrolmen. The saga captivated the community with its dramatic testimonies and emotional outcome. It would take an immense toll on those involved, including Foster Beck, who worried that his reputation had cast a shadow over his lively, intelligent, and supportive fiance, Bertha, who had her own social battles to fight. This riveting memoir, steeped in time and place, seeks to understand how race relations, class, and the memory of southern defeat in the Civil War produced such a haunting distortion of justice, and how it may figure into our literary imagination.

My Father and Atticus Finch: A Lawyer's Fight for Justice in 1930's Alabama

This title is due for release on December 16, 2016
We'll send you an email as soon as it is available!