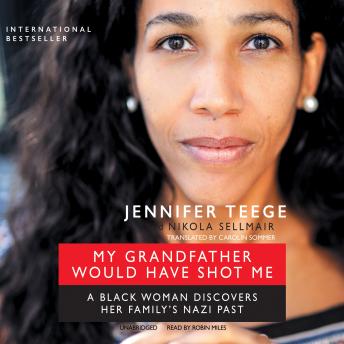 My Grandfather Would Have Shot Me: A Black Woman Discovers Her Family’s Nazi Past

When Jennifer Teege, a German-Nigerian woman, happened to pluck a library book from the shelf, she had no idea that her life would be irrevocably altered. Recognizing photos of her mother and grandmother in the book, she discovers a horrifying fact: her grandfather was Amon Goeth, the vicious Nazi commandant chillingly depicted by Ralph Fiennes in Schindler’s List—a man known and reviled the world over.

Although raised in an orphanage and eventually adopted, Teege had some contact with her biological mother and grandmother as a child. Yet neither revealed that Teege’s grandfather was the Nazi “butcher of Plaszów,” executed for crimes against humanity in 1946. The more Teege reads about Amon Goeth, the more certain she becomes: if her grandfather had met her—a black woman—he would have killed her.

Teege’s discovery sends her, at age thirty-eight, into a severe depression—and on a quest to unearth and fully comprehend her family’s haunted history. Her research takes her to Krakow—to the sites of the Jewish ghetto her grandfather “cleared” in 1943 and the Plaszów concentration camp he then commanded—and back to Israel, where she herself once attended college, learned fluent Hebrew, and formed lasting friendships. Teege struggles to reconnect with her estranged mother, Monika, and to accept that her beloved grandmother once lived in luxury as Amon Goeth’s mistress at Plaszów.

Teege’s story is cowritten by award-winning journalist Nikola Sellmair, who also contributes a second, interwoven narrative that draws on original interviews with Teege’s family and friends and adds historical context. Ultimately, Teege’s resolute search for the truth leads her, step by step, to the possibility of her own liberation.

“In honest, direct, and absorbing prose, Teege and coauthor Nikola Sellmair confront highly personal repercussions of the Holocaust…The book’s real triumph is in its nuanced, universally appealing portrait of an individual searching for her place in the world. Just as Teege’s chance encounter with a library book led her to question the fundamental assumptions of her life, so too the reader…will be forced to reconsider the wide-ranging impact of past injustices on present-day relationships.”—Jewish Book Council

My Grandfather Would Have Shot Me: A Black Woman Discovers Her Family’s Nazi Past