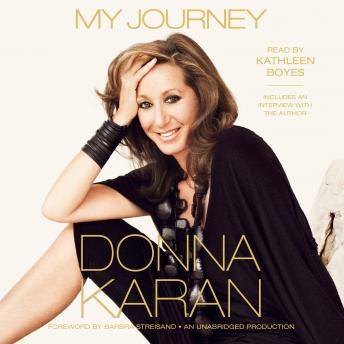 NAMED ONE OF THE BEST BOOKS OF THE YEAR BY HARPER’S BAZAAR • In this candid memoir, featuring a foreword by Barbra Streisand, renowned designer Donna Karan shares intimate details about her lonely childhood, her four-plus decades in the fashion industry, her two marriages, motherhood, and her ongoing quest for self-acceptance and spiritual peace.

Donna Karan was born into the fashion business—her father was a tailor, and her mother was a showroom model and Seventh Avenue saleswoman—yet Karan dreamed of becoming a dancer like Martha Graham or a singer like Barbra Streisand. Fashion was her destiny, though. My Journey traces Karan’s early days as an intern at Anne Klein, the creation of her Seven Easy Pieces (which forever changed the way working women dressed), and the meteoric rise of her company. Along with juicy industry stories, Karan candidly discusses her difficult mother and traumatic childhood, her turbulent romantic life, all the loved ones she has lost over the years, and the personal awakening that occurred just as she reached the height of professional and financial success.

That awakening set Karan down a path of spiritual discovery and self-improvement. From est to Kabbalah, from silent retreats to leech therapy, Karan tried everything to find, as she writes, “calm in the chaos.” But she also reveals how a chaotic life, fueled by endless curiosity and childlike impulses, helped her design seminal collections season after season for global powerhouse brands Donna Karan New York and DKNY. She also details how she has channeled her creativity (and her urge to solve problems and nurture others) into philanthropic work, particularly her early outspoken advocacy for AIDS awareness and research, and the creation of her Urban Zen Foundation, focusing on integrated healthcare and education as well as preservation of culture, which led to her current efforts in Haiti.

Karan’s life has been crowded with glamorous characters and adventures around the world. But she sometimes still feels like that awkward teen from Long Island who never fit in—which makes her all the more endearing. Brimming with Karan’s infectious energy, My Journey is about much more than the fashion world: It is the story of a young woman whose vision and hard work made her a role model for women everywhere—a woman who dreamed big, fought to have it all, broke the rules, and loved passionately along the way.

Praise for My Journey

“By turns moving, insightful, and hilarious, yet always, always heartfelt . . . When you’re a true force of fashion, nothing holds you back.”—Vogue

“When Donna Karan stepped down . . . it was the end of an era, so consider this autobiography her parting gift. . . . Expect a holistic view of the woman behind one of the most influential American labels.”—StyleCaster

“Donna’s creativity and passion as a committed philanthropist are matched only by her gift for friendship. Whether she’s making the world more beautiful or giving a Haitian artisan the tools to create a sustainable business, Donna has always led with great heart and wonderful humor.”—President Bill Clinton

“What we take for granted often comes from the most revolutionary of sources. In New York in the 1980s, no one was more radical than Donna Karan. She created a way of dressing that was womanly, practical, and empowering.”—Anna Wintour

“An extraordinary personal, professional, and spiritual life . . . defined by Donna’s incredible resilience, her inward search for calm in the midst of success, and her insistence on always following her heart.”—Arianna Huffington