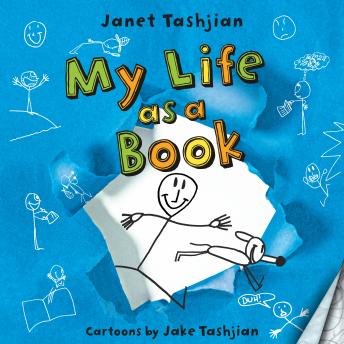 My Life as a Book

#1 of The My Life series

Janet and Jake Tashjian’s award-winning My Life series, praised by Kirkus Reviews as “a kinder, gentler Wimpy Kid with all the fun”, follows the coming-of-age misadventures of middle-grader Derek Fallon in school and through his attempts to follow his bliss.

My Life as a Book is the one that started it all...

Summer's finally here, and Derek Fallon is looking forward to pelting the UPS truck with water balloons, climbing onto the garage roof, and conducting silly investigations.

But when his parents decide to send him to Learning Camp, Derek's dreams of fun come to an end. Ever since he's been labeled a 'reluctant reader,' his mom has pushed him to read 'real' books--something other than his beloved Calvin & Hobbes.

As Derek forges unexpected friendships and uncovers a family secret involving himself (in diapers! no less), he realizes that adventures and surprises are around the corner, complete with curve balls.