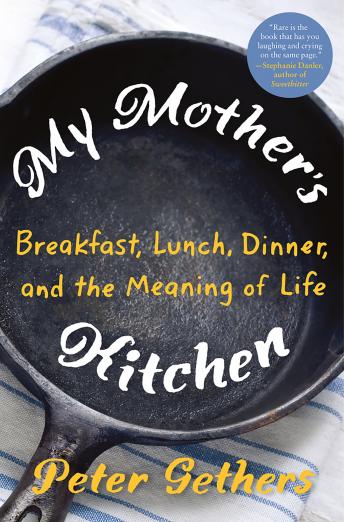 My Mother's Kitchen: Breakfast, Lunch, Dinner, and the Meaning of Life

A funny, moving memoir about a son’s discovery that his mother has a genius for understanding the intimate connections between cooking, people and love

Peter Gethers wants to give his aging mother a very personal and perhaps final gift: a spectacular feast featuring all her favorite dishes. The problem is, although he was raised to love food and wine he doesn’t really know how to cook. So he embarks upon an often hilarious and always touching culinary journey that will ultimately allow him to bring his mother’s friends and loved ones to the table one last time.

The daughter of a restaurateur―the restaurant was New York’s legendary Ratner’s―Judy Gethers discovered a passion for cooking in her 50s. In time, she became a mentor and friend to several of the most famous chefs in America, including Wolfgang Puck, Nancy Silverton and Jonathan Waxman; she also wrote many cookbooks and taught cooking alongside Julia Child. In her 80s, she was robbed of her ability to cook by a debilitating stroke. But illness has brought her closer than ever to her son: Peter regularly visits her so they can share meals, and he can ask questions about her colorful past, while learning her kitchen secrets. Gradually his ambition becomes manifest: he decides to learn how to cook his mother the meal of her dreams and thereby tell the story of her life to all those who have loved her.

With his trademark wit and knowing eye, Peter Gethers has written an unforgettable memoir about how food and family can do much more than feed us―they can nourish our souls.

Includes a bonus PDF with menus, recipes, and more

My Mother's Kitchen: Breakfast, Lunch, Dinner, and the Meaning of Life