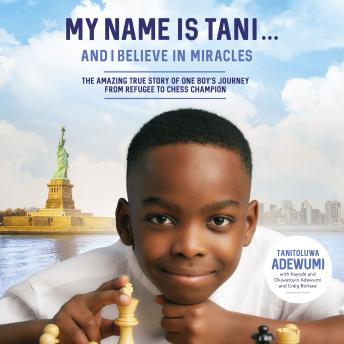 My Name Is Tani . . . and I Believe in Miracles: The Amazing True Story of One Boy's Journey from Refugee to Chess Champion

Every few years the story of an extraordinary child captures the imagination of the world and changes the way we think about ourselves and the world around us. In 2008, it was Ishmael Beah’s story of his life as a child soldier in Sierra Leone, A Long Way Gone. In 2013, it was Malala Yousafzai’s story of risking her life to pursue her education in her native Pakistan.

Tani Adewumi didn’t know what Boko Haram was or why they had threatened his family. All he knew was that when his parents told the family was going to America, Tani thought it was the start of a great adventure rather than an escape. In truth, his family’s journey to the United States was nothing short of miraculous—and the miracles were just beginning.

Tani’s father, Kayode, became a dishwasher and Uber driver while Tani’s mother, Oluwatoyin, cleaned buildings, while the family lived in a homeless shelter. Eight-year-old Tani jumped into his new life with courage and perseverance—and an unusual mind for chess. After joining the chess club in his public school, Tani practiced his game for hours in the evenings at the shelter. Then he began competing in the ultra-exclusive chess clubs of New York City. And winning—again and again. And then, less than a year after he learned to play, Tani won the New York State chess championship.

In My Name Is Tani . . . and I Believe in Miracles, Tani and his parents tell us their incredible true story of sacrificing everything for family, living with nothing but hope, and then sharing generously all they received to discover the greatest riches of all. Tani’s triumphant spirit reminds us of the power of kindness and the beauty of unity as we watch for the next miracle to begin.

Bring the story to life with photos included in the audiobook companion PDF download.

My Name Is Tani . . . and I Believe in Miracles: The Amazing True Story of One Boy's Journey from Refugee to Chess Champion