My Year in Iraq: The Struggle to Build a Future of Hope 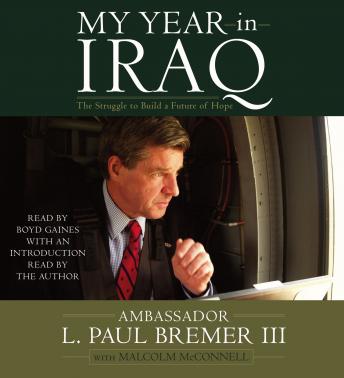 With these words, Ambassador L. Paul 'Jerry' Bremer begins his gripping memoir of fourteen danger-filled months as America's proconsul in Iraq. My Year in Iraq is the only senior insider's perspective on the crucial period following the collapse of Saddam Hussein's regime. In vivid, dramatic detail, Bremer reveals the previously hidden struggles among Iraqi politicians and America's leaders, taking us form the ancient lanes in the holy city of Najaf to the White House Situation Room and the Pentagon E-Ring.

His memoir takes us behind closed doors in Baghdad during hammer-and-tongs negotiations with emerging Iraqi leaders as they struggle to forge the democratic institutions vital to Iraq's future of hope. He describes his private meetings with President Bush, and we witness heated sessions among members of America's National Security Council - George Bush, Dick Cheney, Colin Powell, Donald Rumsfeld, and Condoleezza Rice - as Bremer labors to realize the vision he and President Bush share of a free and democratic New Iraq.

My Year in Iraq is required listening for all those interested in the real story of how America responded to its gravest recent overseas crisis.

My Year in Iraq: The Struggle to Build a Future of Hope

This title is due for release on January 9, 2006
We'll send you an email as soon as it is available!