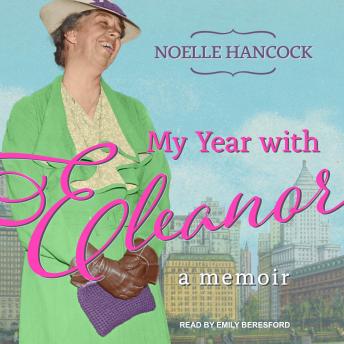 My Year with Eleanor: A Memoir

After losing her high-octane job as an entertainment blogger, Noelle Hancock was lost. About to turn twenty-nine, she'd spent her career writing about celebrities' lives and had forgotten how to live her own. Unemployed and full of self-doubt, she had no idea what she wanted out of life. She feared change-in fact, she feared almost everything. Once confident and ambitious, she had become crippled by anxiety, lacking the courage required even to attend a dinner party-until inspiration struck one day in the form of a quote on a chalkboard in a coffee shop:

'Do one thing every day that scares you.' -Eleanor Roosevelt

Painfully timid as a child, Eleanor Roosevelt dedicated herself to facing her fears, a commitment that shaped the rest of her life. With Eleanor as her guide, Noelle spends the months leading up to her thirtieth birthday pursuing a 'Year of Fear.' From shark diving to fighter pilot lessons, from tap dancing and stand-up comedy to confronting old boyfriends, her hilarious and harrowing adventures teach her about who she is and what she can become-lessons she makes vital for all of us.