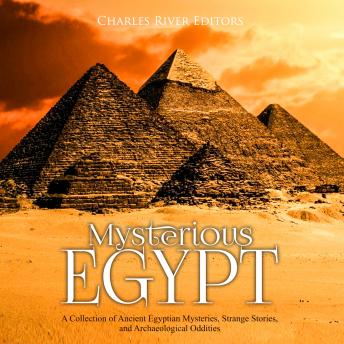 Part of the reason Egyptian history is so intriguing is because it is so enigmatic. The imposing monuments, the strange practice of mummification, the picturesque form of writing, the colorful art, and other aspects of Egyptian life all make for an inspiring and somewhat baffling culture. To this day, despite the wealth of written materials and countless monuments, Egyptologists constantly uncover more mysteries about ancient Egypt, even if many of those mysteries are somewhat mundane and appeal more to academics. Historians still debate precise chronologies of dynasties, theological nuances, and architectural details.

At the same time, such a great and alien civilization has inevitably inspired many strange theories about how it was founded, and how its grand monuments were built. Some of them border on the absurd, including associations with UFOs and Atlantis that have plagued Egyptologists from the beginning. Not only does the “evidence” for these wild theories vanish under close scrutiny, but they emit a whiff of racism as well by implying the Egyptians weren’t capable of building the great monuments themselves.

The reality is far more interesting, and almost as weird. Despite being the most intensely studied ancient culture in the world, there is no shortage of Egyptian mysteries worth studying, and even some of Egypt’s most famous monuments, such as the Sphinx and the Great Pyramid of Giza, are the subjects of heated controversies among scholars. Serious, educated researchers have debated the eras in which they were built, and whether there could be hidden chambers with untold riches inside. Even among the experts who have dedicated their lives to studying this ancient civilization, Egypt has not given up all of its mysteries.