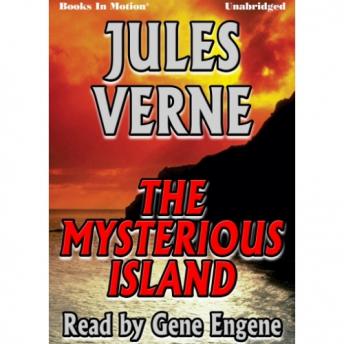 During the Civil War, five Union soldiers and a dog quietly escape from the clutches of the Confederate Army at Richmond, Virginia by hot air balloon. Their intention was to simply drift safely over to the Union lines and rejoin their own troops. Instead, while aloft, they were caught in a high wind and whisked hundreds of miles out to sea. The men carried no provisions for survival and had no idea where they were. Under those circumstances their future was bleak. Worse yet, the balloon was leaking air and slowly deflating. As the balloon made its slow descent from the sky, the men were fortunate to spot an island in the distance. As the balloon dropped lower and lower it also drifted closer to the island. When the basket hit the sea, the partially deflated balloon dragged it violently across the surface and scattered the men among the waves. The men were able to swim to their only refuge...The Mysterious Island. At first the island was accomodating, but then it became more mysterious as unusual and strange happenings occured. Something deep in the depths of the island seemed to have control...something mysterious and unidentifiable....