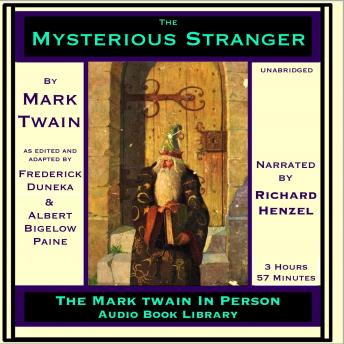 One of Mark Twain's classic tales, a small band of boys in a medieval village make friends with a very real angel whose name is Satan. He assures the boys that he's not The Satan, but his nephew. He looks like a boy of their own age, but his magical powers and unusual perspectives on morals and mankind leave the boys amazed and bewildered.

Mark Twain never finished this story to his own satisfaction, after several attempts. In 1916, his biographer and friend Albert Bigelow Paine, with fellow author Frederick Duneka, added an evil astrologer and devised an ending, and published the version which is here presented. A malicious Considered by Mark Twain scholars to be a fraud due to the additions and changes, it is nevertheless a moving and satisfying story. Narrated by Richard Henzel, who has been portraying Mark Twain on stage and screen for over fifty years.

This title is due for release on March 3, 2019
We'll send you an email as soon as it is available!