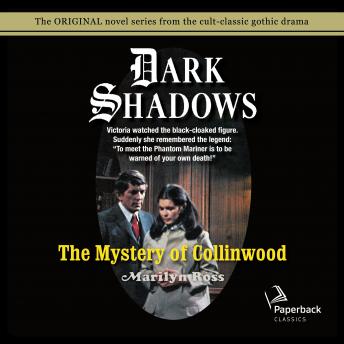 The Mystery of Collinwood

The Mystery of Collinwood (January 1968)
Victoria stood on the ledge known as Suicide Cliffs and stared down at the raging surf and jagged rocks below. Next to her stood Professor Mark Veno, a mysterious visitor to Collinwood. He spoke to her in a low, sinister voice. “Think of all those who threw themselves from these very rocks.”His eyes seemed to burn into hers.
“He’s hypnotizing me,” she thought. She was unable to make herself look away. “No,” she cried. “He’s forcing me to jump!”
The Professor came a step closer, his eyes still glowing. Victoria found herself unable to move—unable to speak. She was helpless as she felt her willpower dissolve under his evil spell…