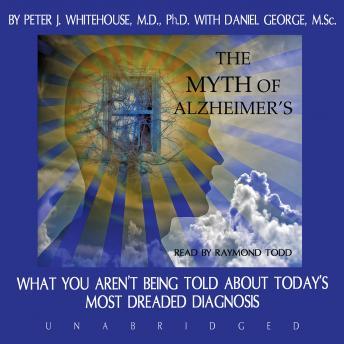 The Myth of Alzheimer's: What You Aren't Being Told about Today's Most Dreaded Diagnosis

Leading gerontologist Peter J. Whitehouse presents his provocative approach to aging and senility, calling for a relabeling of age-associated cognitive challenges. In a call to arms to reevaluate the way we think about and deal with Alzheimer’s disease, he claims that the current view of Alzheimer’s as a virtual death sentence obscures the potential for vitality and wisdom that still exists in the graying years.
The Alzheimer’s label too often generates fear, paranoia, and anxiety. By taking a closer look at what Alzheimer’s is and isn’t, Whitehouse offers hope to families as well as to those who suffer from a decline in their cognitive abilities. Using examples from his own practice and from around the world, he presents a new approach to the treatment of brain aging and provides practical advice for getting the best level of care.

Myth of Alzheimer's: What You Aren't Being Told about Today's Most Dreaded Diagnosis

This title is due for release on August 1, 2008
We'll send you an email as soon as it is available!