Mythology: A Collection of Stories, Myths, and Gods from Scandinavia and Egypt 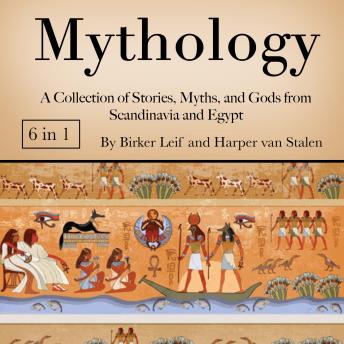 There are 6 titles in this book, which are:

Book 1: Scandinavians of the ancient world had many gods and goddesses they worshiped. Are you curious about which ones they revered so much?

Well, in this guide, that’s exactly what you will learn.

Book 2: How did the ancient Vikings live?

This and many other questions about history and mythology will be answered in this brief guide. For example, an entire chapter is devoted to women’s roles in Viking society.


Book 3: Historical and mythological anecdotes are given in this fascinating compilation of stories and facts.

Some of the things you will read about or listen to, concern the following:

- Thor’s hammer and its background story.

- Asgard and its significance in Norse mythology.


Book 4: In this book, you will be taught about some of the most prestigious Egyptian gods and goddesses that were worshipped a long time ago. After some educational resources and information about them, we dive into some of the most intriguing stories the ancient Egyptian culture could muster, such as Isis and the seven scorpions, the peasant and the workman, the great queen Hatshepsut, and the princess of Bekhten.


Book 5: This guide will also entertain you with specific stories that the Egyptian mythology has left us with. You will read more (or listen) about the experiences of Sinuh, the land of the dead they believed in, and the story of the doomed prince.

Book 6: There are many gods and goddesses the ancient Egyptians believed in. Today, we will explore some of the most important ones, as well as expand on the stories of some heroes and characters that haven’t been forgotten through the ages.

Mythology: A Collection of Stories, Myths, and Gods from Scandinavia and Egypt