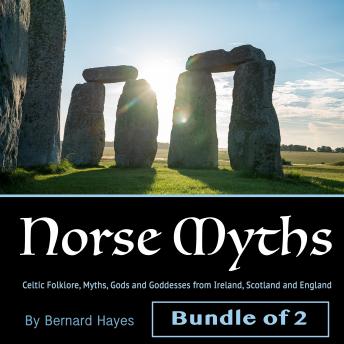 Book 1:
In this audiobook, you will find the most important facts about Celtic mythology, a people that is often overlooked or undervalued. Their tales and folklores have their routes in ancient customs and historical events, and with those backgrounds, you will get a greater understanding of the Celts. You will discover:
More about the Celtic society, their religion, arts, and the collapse of that society.
The Celtic history, traces of their language, and their relationship with the Romans who had conquests on the British Isles.
Facts about their technology, warfare, and false stories or notions you may have heard about them.
A concise outline of the Celtic gods and goddesses they worshipped and revered.
Explanations about festivals and rites, as well as what they thought of cosmology and eschatology.
Book 2:
The ancient culture of the Celts, with its folklore and fairytales, has sparked the imagination of many. The mythological creatures, stories, and legends have their enchanting flair and have certainly been the topic of many historians and scholars. It is time to dive deeper into some of the best-known myths and epic ventures of the gods, goddesses, and magical realms from the British Isles. You will hear about things like:
Cultural backgrounds and the way it integrated with the Celts’ lives
The four cycles of Irish Mythology. This may sound surprising to you
The Selkies and their connection to the Celts
The coming of Finn and all the drama around it
The Fianna of Erin and the reason why this is such a popular story
Different tales from the Ossianic cycle