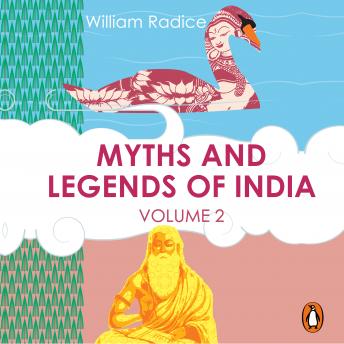 Myths and Legends of India Vol. 2

'Since time immemorial, India has been an ocean bed over which numerous stories have flowed and enriched the world. Storytellers from Tulsidas to Rohinton Mistry have added their magic to this magnificent repository. Inspired in part by Somadeva’s Kathasaritasagara, William Radice collects these timeless tales of India, and tells them anew through his unique idiom. Like itinerant storytellers, he fills these tales with emotion and wit, bringing them alive for the contemporary reader. In Volume 1, the first section begins with the creation myth of Prajapati, while the Mahabharata section starts with Sakuntala’s story, going up to the founding of Dvaraka by Krishna. In Volume 2, the first section begins with the Hindu myth about Brahma’s creation of bodies, while the Mahabharata section starts with the notorious dice-game and ends with the death of Abhimanyu. True to India’s diversity, the third section of both volumes comprises legends and folk tales from Hindu, Muslim, Buddhist, Jain, Christian and tribal sources. The volumes of Myths and Legends of India are a treasure to delight in and cherish.'

Myths and Legends of India Vol. 2