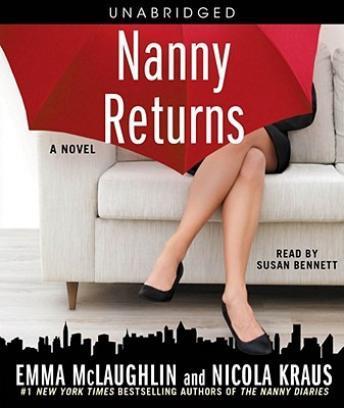 New from the #1 New York Times bestselling authors of The Nanny Diaries , the highly anticipated sequel that picks up ten years later.

More than four million people fell in love with Nan, the smart, spirited, and sympathetic heroine of The Nanny Diaries —now she’s back. After living abroad for twelve years, she and her husband, Ryan, aka H.H., have returned to New York to make a life for themselves. In the midst of getting her new business off the ground and renovating their fixer-upper, Ryan announces his sudden desire to start a family. His timing simply couldn’t be worse.

To compound the mounting construction and marital chaos, her former charge, Grayer X, now sixteen years old, makes a drunken, late-night visit, wanting to know why she abandoned him all those years ago. But how can she explain to Grayer what she still hasn’t come to terms with herself? In an attempt to assuage her guilt, yet against every instinct, Nan tries to help Grayer and his younger brother, Stilton, through their parents’ brutal divorce, drawing her back into the ever-bizarre life of Mrs. X and her Upper East Side enclave of power and privilege.

After putting miles and years between herself and this world, Nan find she’s once again on the front line of the battle with the couture-clad elite for their children’s well-being.

With its whip-smart dialogue and keen observations of modern life, Nanny Returns gives a firsthand tour of what happens when a community that chose money over love finds themselves with neither.