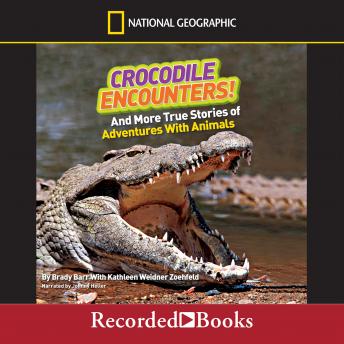 Follow along with National Geographic explorer Brady Barr as he crawls into a muddy hole just barely big enough for his shoulders, and comes face to face with thirteen crocodiles! Laugh out loud as you learn how to catch a crocodile using shoe laces and underpants. Read in anticipation to find out what happens when you put a 600-lb crocodile on an airplane in just a flimsy wooden crate. These action-packed stories and more will engage readers and inspire them to go out and explore their own world. Stories include: - 'Undercover Croc,' in which Brady 'becomes a crocodile,' by donning a specially-designed protective croc suit, and infiltrates a group of Nile crocodiles in Tanzania. - 'Toy Story,' in which he uses (and loses) a radio-controlled car with video camera, in a hilarious failed attempt to capture a Nile crocodile in South Africa. - 'Deep Dark Den'--in an attempt to relocate a group of crocodiles causing problems to neighboring villagers in Costa Rica, Brady finds himself underground in a deep muddy hole with thirteen angry crocs. - 'Croc in a Box,' Brady tries to move a giant, troublesome croc from Uganda safely to an American zoo, but discovers the croc is much stronger than the 'sturdy wooden box' that has been built to contain him. National Geographic supports K-12 educators with ELA Common Core Resources. Visit www.natgeoed.org/commoncore for more information.

This title is due for release on September 26, 2014
We'll send you an email as soon as it is available!