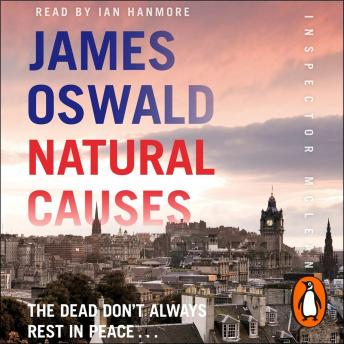 A young girl's mutilated body is discovered in a sealed room. Her remains are carefully arranged, in what seems to have been a cruel and macabre ritual, which appears to have taken place over 60 years ago.

For newly appointed Edinburgh Detective Inspector Tony McLean this baffling cold case ought to be a low priority - but he is haunted by the young victim and her grisly death.

Meanwhile, the city is horrified by a series of bloody killings. Deaths for which there appears to be neither rhyme nor reason, and which leave Edinburgh's police at a loss.

McLean is convinced that these deaths are somehow connected to the terrible ceremonial killing of the girl, all those years ago. It is an irrational, almost supernatural theory.

And one which will lead McLean closer to the heart of a terrifying and ancient evil . . .

Natural Causes is the opening to an electrifying series, for fans of Ian Rankin, Peter James and Stuart McBride.

'Literary sensation...James' overnight success has drawn comparisons with the meteoric rise of EL James and her Fifty Shades of Grey series' Daily Mail

'Fifty Shades of Hay' The Times

'The hallmarks of Val McDermid or Ian Rankin: it's dark, violent, noirish' The Herald

'A good read' The Times

A good detective story with a different twist - love the realistic writing - story and characters very believable - and the hints of supernatural excellent. Kept me interested right to the end.