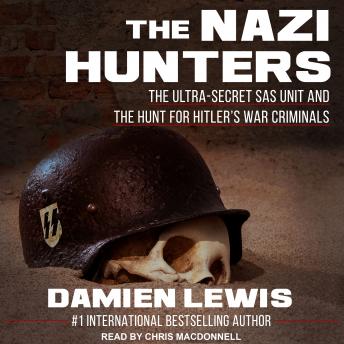 The Nazi Hunters: The Ultra-Secret SAS Unit and the Hunt for Hitler's War Criminals

In the late summer of 1944, eighty British Special Air Service (SAS) soldiers undertook a covert commando raid, parachuting behind enemy lines into the Vosges Mountains in occupied France to sabotage Nazi-held roads, railways, and ammo dumps, and assassinate high-ranking German officers, undermining the final stand of Hitler's Third Reich. Despite their successes, more than half the men were captured, tortured, and executed.

Although the SAS was officially dissolved when the war ended, a top-secret black ops unit was formed, under Churchill's personal command, to hunt down the SS commanders who had murdered their special forces comrades, as well as war criminals from concentration camps who had eluded the Nuremberg trials. Under the cover of full deniability, “The Secret Hunters” waged a covert war of justice and retribution-uncovering the full horror of Hitler's regime as well as dark secrets of Stalin's Russia and the growing threat of what would become the Cold War.

While I had heard of the SAS and its exploits in North Africa, I was less aware of its role in assisting the French Resistance behind enemy lines which made for interesting reading. However, the truly fascinating element of the book for me was the relentless efforts made by the SAS to discover the location of its lost comrades even as the war was winding down and the identity of their killers so that the Nazi war criminals might be brought to justice. What made that effort truly remarkable was that those seeking to hunt down the perpetrators did so even after their unit had been disbanded in the immediate aftermath of the war and the operation was something of its own "black" ops activity well after the German surrender.