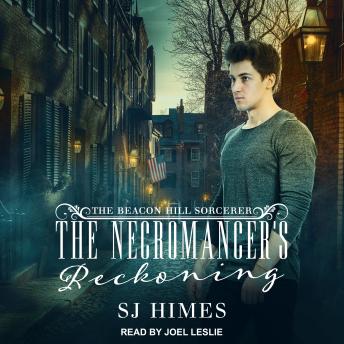 For a decade, Angel Salvatore has been the most powerful sorcerer and only necromancer in all the Northeast. Never one to ask permission nor apologies, he has acted with near impunity for years.

The High Council of Sorcery has come to Boston, and Angel is their target. Charged with numerous violations of practitioner laws, his freedom and family are placed in jeopardy.

If found guilty, Angel's apprentice Daniel will be imprisoned to serve out the remaining years of his apprenticeship. Isaac, his brother, is too vulnerable to be left unguarded, and Angel fears for his sanity and health. And Simeon, Elder vampire and Angel's mate refuses to see Angel convicted under the laws of the Council and his actions to keep Angel free threaten to start a war that could destroy their world. And Angel faces the severest of punishments-the castration of his gifts.

Dealing with an impending trial, a wayward ghost, and a grave-robbing ring of thieves leaves Angel on the edge. He thinks he may have a handle on things until violence erupts across the city, and a stranger comes to town . . . a stranger with his own dark powers of necromancy.

Thank you for the ARC audio, I voluntarily give this book an honest review. With the news about what has bothered Isaac all these years over the guilty feeling he hold, can Angel get him the help he needs? When a letter arrives announcing the arrival of a council member to the states. "Angie"

The Beacon Hill Sorcerer series is one of my favorite urban fantasy series, and part of that is just how mind-blowingly well Joel Leslie brings this cast of characters to life. Leslie is simply brilliant, performing a ton of character voices with distinctive tones and/or accents, and highlighting everything happening in The Necromancer’s Reckoning, from the sweeter, more romantic moments between Angel and Simeon, to the kicking ass and taking names portions of the story. I was completely immersed from the first minute, and honestly surprised by how fast the nine and half hours went. It’s a great listen, with fantastic world-building, and I love how Angel always handles everything in his own inimitable style as a complete badass. Plus, we get to see from Simeon’s point of view what happens when you kidnap the Leannán anam of a vampire elder. But a Wendigo, Angel?! You know who I really feel for in this series? Detective O’Malley. I wonder if O’Malley’s boss ever called him in and laid out the whole, “He likes you, he works as well as can be expected with you, so we’re just gonna have you be the liaison to Angel Salvatore and any bullshit he does.” and O’Malley went home, drank a bottle of scotch, and decided to just stop fighting it and relax into it. That’s a short story I’d be into reading, but I digress. The Necromancer’s Reckoning is told mainly from Angel’s POV, but does include multiple POV, including one from Eroch! (I love the beastie!). The whole story is action-packed with Angel taking on the High Council of Sorcery, a grave robbing theft ring that uses the ghosts of dearly departed, and multiple attempts on Angel’s apprentice, Daniel, while also dealing with vampire politics, and getting his brother Isaac into rehab. I’m not going to lie, Angel and Simeon’s love makes me gooey, and the series as a whole is written so well I highly recommend you picking it up, but if you have the extra coin available, I’d definitely gently push you towards investing in the audiobooks because they’re fantastic and absolutely worth it. “I will love you forever, mo ghra. Our love will outlast the sun,” Simeon promised, right before kissing Angel breathless. Recommended! via #GayBookReviews