Need To Know: 'You won't be able to put it down!' Shari Lapena, author of THE COUPLE NEXT DOOR 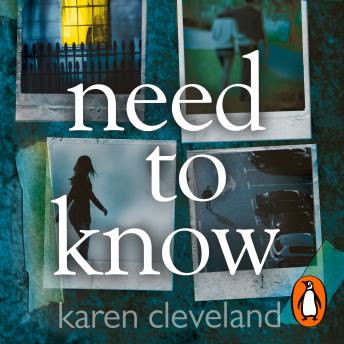 Vivian Miller is a CIA analyst assigned to uncover Russian sleeper cells in the USA. After accessing the computer of a potential Russian spy, she stumbles on a secret dossier of deep-cover agents living in her own country. Five seemingly normal people living in plain sight.

A few clicks later, everything that matters to Vivian is threatened - her job, her husband, even her four children . . .

Vivian has vowed to defend her country against all enemies, foreign and domestic. But now she's facing impossible choices. Torn between loyalty and betrayal, allegiance and treason, love and suspicion, who can she trust?

Will her next move be the right one?

‘You'll devour this terrific debut like the rest of us, skipping lunch, losing sleep, turning pages until the end.’ JOHN GRISHAM

‘I raced through this gripping tale of domesticity and deceit. Cleveland deliciously ratchets up the tension at every turn . . . you won’t be able to put it down until the final, stunning page!’ SHARI LAPENA

‘Heart-poundingly suspenseful and heart-wrenchingly insightful, Need to Know hums with authentic detail, crisp storytelling, and characters that will long stay in your thoughts.’ J. P. DELANEY

Need To Know: 'You won't be able to put it down!' Shari Lapena, author of THE COUPLE NEXT DOOR