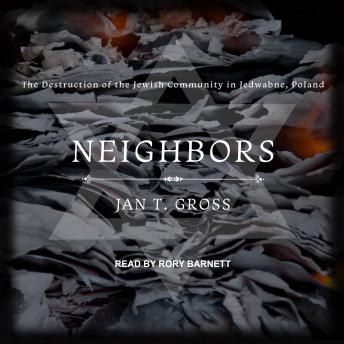 Neighbors: The Destruction of the Jewish Community in Jedwabne, Poland

One summer day in 1941, half of the Polish town of Jedwabne murdered the other half, 1,600 men, women, and children, all but seven of the town's Jews. Neighbors tells their story.

This is a shocking, brutal story that has never before been told. It is the most important study of Polish-Jewish relations to be published in decades and should become a classic of Holocaust literature.

Jan Gross pieces together eyewitness accounts and other evidence into an engulfing reconstruction of the horrific July day remembered well by locals but forgotten by history. His investigation reads like a detective story, and its unfolding yields wider truths about Jewish-Polish relations, the Holocaust, and human responses to occupation and totalitarianism. It is a story of surprises: The newly occupying German army did not compel the massacre, and Jedwabne's Jews and Christians had previously enjoyed cordial relations. After the war, the nearby family who saved Jedwabne's surviving Jews was derided and driven from the area. The single Jew offered mercy by the town declined it.

Most arresting is the sinking realization that Jedwabne's Jews were clubbed, drowned, gutted, and burned not by faceless Nazis, but by people whose features and names they knew well: their former schoolmates and those who sold them food, bought their milk, and chatted with them in the street. As much as such a question can ever be answered, Neighbors tells us why.

In many ways, this is a simple book. It is easy to read in a single sitting, and hard not to. But its simplicity is deceptive. Gross's new and persuasive answers to vexed questions rewrite the history of twentieth-century Poland. This book proves, finally, that the fates of Poles and Jews during World War II can be comprehended only together.

Neighbors: The Destruction of the Jewish Community in Jedwabne, Poland