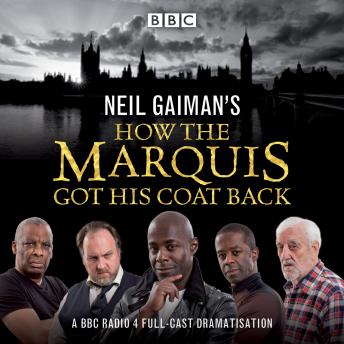 Neil Gaiman's How the Marquis Got His Coat Back: BBC Radio 4 full-cast dramatisation

Returning us to London Below, this enchanting tale continues the story of one of the most colourful characters from Neverwhere – the cool, charming, resourceful Marquis de Carabas, who trades in favours and always has a plan...

The Marquis' coat is a thing of wonder and beauty. Sleek, stylish and 'the colour of a wet street at midnight', it has numerous pockets, sumptuous sleeves and the power to transform a young sneak thief into a nobleman.

And now it is missing, sold by the Sewer Folk. To reclaim it, the Marquis must venture into one of the most terrifying parts of the subterranean city, encounter an old enemy, face dreadful dangers and – worst of all – accept help from someone very close to home.

Expanded and dramatised for Radio 4 by the award-winning Dirk Maggs (Neverwhere, Good Omens, The Hitchhiker’s Guide to the Galaxy) and co-directed by Dirk Maggs and Heather Larmour, this spine-tingling production features a star cast including James McAvoy, Adrian Lester, Don Warrington and Bernard Cribbins, with a cameo appearance by Neil Gaiman himself.

Neil Gaiman's How the Marquis Got His Coat Back: BBC Radio 4 full-cast dramatisation

This title is due for release on November 10, 2016
We'll send you an email as soon as it is available!