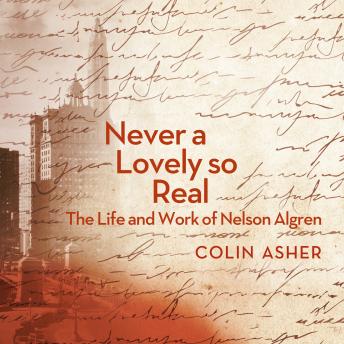 Never a Lovely So Real: The Life and Work of Nelson Algren

This definitive biography reclaims Nelson Algren as a towering literary figure and finally unravels the enigma of his disappearance from American letters.

For a time, Nelson Algren was America's most famous author, lauded by the likes of Richard Wright and Ernest Hemingway. Millions bought his books. Algren's third novel, The Man with the Golden Arm, won the first National Book Award, and Frank Sinatra starred in the movie. But despite Algren's talent, he abandoned fiction and fell into obscurity. The cause of his decline was never clear. Some said he drank his talent away; others cited writer's block. The truth, hidden in the pages of his books, is far more complicated and tragic. Now, almost forty years after Algren's death, Colin Asher finally captures the full, novelistic story of his life in a magisterial biography set against mid-twentieth-century American politics and culture.

Never a Lovely So Real offers an exquisitely detailed, engrossing portrait of a master who, as esteemed literary critic Maxwell Geismar wrote, was capable of suggesting 'the whole contour of a human life in a few terse pages.'

Never a Lovely So Real: The Life and Work of Nelson Algren